i think one of my greatest challenges so far was to quit smoking. i was a smoker many years ago and quit for a very long time. working the midnight shift 40 to 60 hours a week while renovating a store became stressful, and cigarettes became my friends. the reno was over but the habit continued two years later. i promised myself that this would be the year that i quit.

i smoked anywhere from a half pack to almost an entire pack each day. more when i was at work, it was a part of the routine to meet up in the smoke hole. we would all suck back as many as we could before venturing back inside for a couple hours. at first i had no desire to quit, i was a happy smoker.

sometime in the beginning of winter, i got really sick. i couldn't have a cigarette if i wanted to, i couldn't inhale the smoke without choking. i was sick for weeks, and at that point i knew the cigarettes were doing far more damage than good, my calm nerves aren't worth the pain in my chest.

from that point on i had cut back drastically, but i still wanted to smoke. at work we have something called 'MSP' [my sustainability plan] on a board where you can sign up to 'sponsor' one sustainable lifestyle or another, and one of the categories is to quit smoking. so, i signed up. i like the program because it's out in the open, so your peers can challenge you to stick with your MSP. i had written that i would be smoke free by the first day of spring, which gave me a couple months to work my way down to none.

in the first couple weeks i stopped smoking after work completely. i knew already that it was affecting my running, and by going for a run almost every day it both kept me occupied, and gave me a chance to really feel how much easier it is to run if i don't have a smoke. but then i'd get to work and by first break, i was dieing for one. or two or three... i was still smoking heavy on my breaks.

once i announced my plan to quit by the first day of spring, my peers started to hold me up to it, constantly ask how i was doing with the quitting. eventually i was down to one or two smokes a day, usually at lunch time.  i continued to venture out to the smoke hole with my friends at break to get some air and enjoy the social aspect, and make it feel as though my urge to smoke was satisfied even if i wasn't the one smoking.

then the big day came. i went out for lunch and my friend handed me his pack... and i handed it right back, no thanks! i did it... i finally don't want a cigarette. it's been ten days since i had my last smoke, and i'm starting to feel better already. i still go outside for breaks as being indoors for nine hours straight isn't my idea of a good time, but i don't feel the need to light one up.. besides maybe the first five seconds of someone else lighting one. it passes quickly, and i can enjoy the rest of my break with a bottle of water or iced tea.

well, i have noticed that my writing habits are about as sparse as other good habits, which is something that i'm still working on . i find setting a deadline helps me so that i have something to work towards, and this weekend was a big one for me. i will pig out this one last time on turkey dinner, then more or less cut out the meat. now that i have my finances in order, i can start my order for Mannatech's NutriVerus which helps me significantly to keep my energy levels up and support my thyroid function. it was helping before, but i ran out of money, and in the month i wasn't taking it, i noticed a huge decline in my 'feelgood'. while using the products i feel it's such a waste to consume anything that isn't 'real food' so it's huge encouragement to stay healthy and keep up with the program.

next i'll try to cover other healthy habits that i am encorporating into my lifestyle such as supplements and snacks, and different ways to stay fit and build muscle. stay tuned!

adding in the good stuff...

kicking bad habits isn't the easiest thing in the world to do. a better method is to add in good habits, and eventually the less beneficial habits will fade. for instance, snacking on junk food. we crave those sugars because our bodies need energy.. and we instantly connect that craving with sweets.if we get what we need from the food that we eat then we are less likely to crave things that aren't very good for us.

my eating habits are not terrible, but there's things i would like to slowly eliminate or cut back hugely on like gluten filled products such as bread and pasta. those and my dairy laden favourites chocolate and cheese, are my ultimate weaknesses. it's really hard to skip on cheese.. but it can be done.

first of all, in order to not feel the urge to snack on things i shouldn't be eating, i must start my day with a filling delicious protein shake blended with some fruit et cetera.. i had decided to try ViSalus for a while, but it is a whey based product which over time started to bother my stomach, so i switched to a product that i had tried before in the past.. a plant based protein blend and nutrient boost called VegaOne. it's a great mix with lots of energy, but i found myself still feeling snacky as i burn a lot of energy at my job. so i found something to add to it to give it more substance, one of my favourite 'superfoods' called Salba. it's basically the same thing as chia seeds, only grown with nutrient density as priority to make a top of the line health food product.

i have a bit of a sweet tooth for chocolate [what chick doesn't?!] so i had been on the hunt for something chocolaty, without being a wrecking ball on my healthy 'diet'.. i found this delicious snack at Bulk Barn by a company called Enjoy Life, it's a double chocolate granola crunch. there's other flavours too, but i wanted to try this one of course. the product is made gluten-free, vegan friendly and free of most common food allergens like soy, milk products, wheat or egg. and to my surprise, it's actually pretty tasty. lots of vitamins, iron, fibre and even protein, and still a dab of sweetness.

anyhoo.. i've more or less cut out fruit juice as well, lots of sugar even if there is no sugar added so i try to drink them occasionally. my replacement is a big icy bottle of water with fresh squeezed lemon juice and a few slices of the lemon itself. in the summer i might add a bit of honey for sweetness, but i like it as is. my taste has changed over the years, i don't feel the need for sweet drinks as much anymore. i hope to change my taste on a few other things, like hopefully not find meat appealing at all.. i try not to eat it but sometimes i'm tempted, and i kick myself for it later. pork is the ultimate enemy. not sure i could ever ditch sushi though!

off to bed.. another long busy week ahead. and hopefully gather more delicious and nutritious additions to my simple better eating agenda. peace!
Posted by Sadie Sea at 7:38 PM No comments:

making a routine... keeping up... still working on it. it's been hectic, but then when isn't it? i'm trying to teach myself to manage with what little time i have, and be resourceful to maintain a good diet and exercise whenever i can. as the warmer weather starts to roll in i tend to snap back into my rucksack totin' lifestyle... even if i have a home, i barely go to it in good weather. so i suppose it's safe to say, i have evolved into a seasonal vagabond...

that being said, i can't neglect my health and diet just because i'm constantly on the move. in the winter it was actually easier to find a routine because i went home right away after work each day. i'd run in the cold because it would keep me warm.. but now that it's warming up there's so much to be done, and it's far more effort to get in the extra runs and workouts that i need to keep up with the weight loss. the diet part too, if i'm not always going home it's hard to keep up with making shakes, so i'm working on what types of foods travel well and provide what i need in terms of energy and nutrients for the day.

speaking of shakes, the ViSalus was too hard on the guts after a while, i should have known... freakin whey! so it's back to the Vega. they've improved their recipe since last i used their products, and it appears that i shouldn't have to use as much, so the cost won't be too much higher. it is truly the best protein mix i've had, the most well rounded plant based protein mix out there. i also picked up a bag of cracked chia.. i remember liking it before, and my only regret is not replenishing my supply sooner.

and although i haven't been running every day, i've still managed to be on foot all over town.. i couldn't get a bus pass all week because their card machine was down, so i hoofed it to work most days, and then spent the afternoons on our first nice days geocaching and deploying munzees all over town.. so hooked on GPS treasure hunt games! of course in my wanders i've been scoping out different resources for a mobile yet healthy lifestyle. the one and only downside to working straight days is that i have been missing the farmer's market. i only make it once every week or two, when i used to go three times a week. so i've had to find other sources of fresh and/or local food. also living out of a backpack can be inconvenient at times to have something fresh and healthy on hand, but i'll get into my resources in another post. 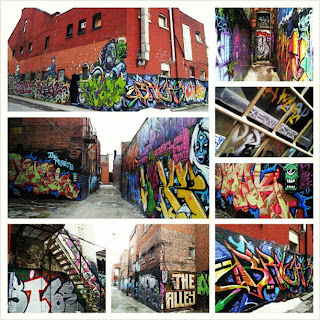 for now, i'll share a collage from the alley downtown that i like to check out every time i go, it's ever changing and always bright. while the trails are busy thawing and being a soupy mess, i get in some urban hikes, utilizing pedestrian pathways, boardwalks and cut-throughs to navigate the concrete jungle.. gotta keep the adventure alive!

ps.. coming soon, a list of healthy power-ups, the ones i have, the ones i'm using, and the ones i plan to get.. and i will record when and how i incorporate each into my diet and lifestyle.
Posted by Sadie Sea at 7:33 PM No comments: