wow... slacking on this blog or what?! ahh well, i'm not usually one to get nailed down to a computer for too long, but i'm trying. this month has been mainly focused on getting our new yard ready to grow some food. not only is eating fresh picked food incredibly good for your overall health, but the very act of gardening is good for you also.

just like any workout, or anything in life really, you get out of it what you put into it. if you are lazy about digging the ground, there won't be room for root growth, and your garden will not be strong. digging uses all sorts of muscles, and after a day of building a new garden plot, i can certainly feel it. 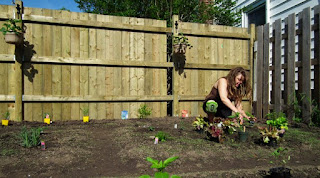 after the initial dig, there's still plenty of gentle exercise in store when caring for a garden. not only that, but it's a meditative stress reliever. there's apparently a bacteria in the soil itself that is a mood enhancer, and triggers the release of seratonin in the brain. for a really cool article on gardening and happiness, check this link. plus each time we bend to pull a weed or pluck some fresh produce, we stretch! mmmm garden yoga... 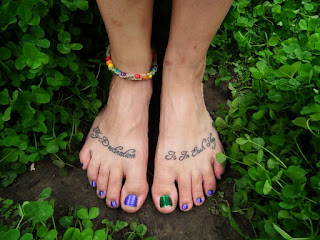 this next week will be focused mostly on the garden, which in turn makes me more conscious of my health. i find that when there is a garden in the equation, everyone around adopts healthier lifestyle habits. we are constantly looking for even more ways to repurpose things. we choose meals that involve more fresh ingredients. we walk to the farmer's market to meet other great people that grow and prepare fresh delicious food.

stay tuned for more garden freshness, and exercise.. and about making it fun to get in shape!

Email ThisBlogThis!Share to TwitterShare to FacebookShare to Pinterest
Labels: gardening for health, homebase

yeahh... so i'm bad at keeping a blog. but it's because i'm keeping busy!! i probably mentioned some time back that we moved at the beginning of the month.. having our own place allows me a better chance to work out a routine. especially for sleeping... and sleep is mega important.

i have been back on the mannatech for a couple of months now, and i feel much better, more energetic. on slower days i'll work out indoors on my equalizers, but the past couple weeks have been full of yard work, gardening and adventuring.. hubby and i are hooked on GPSgaming, i'm all about the geocaching and munzees, and he found a new one called ingress. that one is a strictly virtual GPS adventure game along the lines of alien infiltration and world domination... but you actually have to go to the physical locations to tap the portals and build/destruct them. it's pretty cool, and Matt walks a lot faster than i do so i get my slow jog cardio.

one thing that i have been focusing on when we play is carrying nothing but myself. literally.. i walk everywhere so it's pretty usual for me to have a bag or a small backpack of some sort. i find that by carrying stuff like that around my mind focuses more on keeping that weight balanced and in place more so than my own self. i forget to check my posture and my breathing and all that.. i literally feel a sort of high when i walk not carrying anything.. so liberating. that's what i loved most about trail running... until my hips decided it was time to stop doing that. i must find a low impact method of getting my cardio without hurting my hips!! so anyhoo, i'll focus on keeping my back straight, my core tight and my shoulders back while we walk around the city hitting portals. and i get to get fresh air with my baby.. good things all around.

unfortunately about a week ago my bike was stolen from our friend's back yard. it's heart breaking because a] my mommy bought me that bike for my birthday, b] it was vintage! and c] i'm too broke to buy another one, and that was my favourite workout. in the meantime, i suppose it's a good thing there's lots of digging to be done.. it's certainly a workout! that and lugging carts of soil home from the market shop across the street.

well that's about it for now. oh and when we moved i left the scale behind. i think i've been more worried about the numbers than i really should be. my goal is not just to lose weight, but to be happy healthy and comfortable with myself. i'm getting there...
Posted by Sadie Sea at 12:19 AM No comments:

it's been an interesting year so far for me. the journey to better health has been a struggle, but i refuse to give up. getting healthy, to me, is about more than just losing fat, it's about doing many things that make you feel better and generally improve the quality of life.

i decided that it's about time in my life where i should get rid of anything extra that i have been holding on to, not just the weight.. things i have been carrying around with me for far too long for fear of letting go. i think that subconscious fear of letting go had spread it's way from my environment into my mind and has made it difficult to let go of the stresses and the weight that comes with it.

having just moved, i had the opportunity to go through everything that i own and discard things that i no longer needed. even things that i had packed and moved a million times before... i finally found the strength to just let go of the past. i was at work the day after moving, and i realized there was one more thing that needed to be let go.. my dreadlocks.

i had been contemplating cutting off my dreads since sometime last year, but i just didn't have the nerve to do the deed. earlier this spring i did some thinning, i took out the locks that were looking weak and cut myself some bangs. this time it got serious. i went and bought some organic coconut shampoo and conditioner, some anti-frizz serum, hair cutting scissors and a nice brush, and went to town. i had finally made up my mind that i was finished carrying them around, and making the cut was one of the most liberating feelings i have felt in my life. almost makes me wonder why i kept myself locked up for so long... 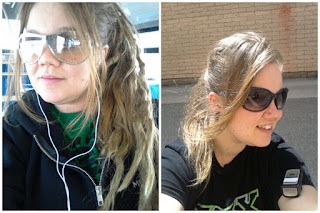 ahhhh so free! fastest five pounds i ever lost.. and i have no regrets. i have been hesitant to cut them for so long.. for almost a decade straight dreadlocks have been, as i see it, a major part of my identity. they are/were a slowly evolving piece of my personal history, the part that held on to so many moments in the past, good or bad. i feel like my thoughts were locked up with them, and the time was well overdue to do something about it. i'm proud that i rocked them for ever so long, and i'm even more proud that i found the strength to let go of them, and not look back with regret.

i think the most interesting thing i have noticed in the past week since i cut them is how people notice me. in the past i would have complete strangers come up to me and tell me they loved my hair, ask me questions about how i did the dreadlocks and how to take care of them and whatnot... i was noticed for my dreads. now that they're gone, it's only the people who know me [or remember me] that complement  and comment on my hair. i went to Toronto yesterday to rally up with some people i have been friends with for a long time, but only see a couple times a year. it was funny watching people walk right past me not noticing i was there until i took off my shades, and they realized it was me.. and then watching them almost die of shock that i lost my locks! too funny.

anyways, i had almost forgotten how wonderful it feels to run a brush over my scalp. and y'know, wash my hair without carrying around water half the day, lay down without laying on my hair, get dressed without a mass of locks getting in the way... all that good stuff. i feel like a new person, and hopefully this mind state helps me with my journey.

forever forward...
Posted by Sadie Sea at 3:58 AM No comments: