back to the juicer

yea, i haven't posted in a while. i just wanted to put it out there.. i haven't given up. i do however have to take a break from checking the scale. again. it's certainly not as productive right now as keeping up with the numbers on my fitbit. after a few weeks of keeping tabs on my sleep and activity levels, it's given me some perspective on how to better sort my time.

for instance, i can track my sleep patterns. on overage, i'm 'restless' around 4am. it's pretty well pointless for me to try and go back to sleep once i've woken up, so i'm beginning to accept that is just simply my wake up time. so instead of staying up til eleven and setting an alarm for five, i've shifted my sleep schedule back an hour to get the most out of my energy. now instead of preparing all of my juice for the next day before bed, i can do so in the morning before i go to work. thankfully i work a steady shift which has really helped me to begin to get my health on track. and juice is better the day it's made anyway.

speaking of juice.. juicing is something that's really easy to be lazy about. the preparations, the clean up, not to mention the walk every second day to the grocery to get another load of produce.. but i've been managing to keep up with it. i have noticed that my tastes are beginning to change; celery isn't as bitter as it once was, and parsley isn't as weird in a juice as the first time i tried it. i'm finally adjusting to the sudden influx of raw veggie juice.

to make the whole process easier, i've kind of turned it into a ritual. one that is adaptable whenever i discover an easier or faster way to do something. it's taken me a couple months to figure out what works for me and what are the best things to include in my juice, so here's a basic outline.

first of all, i invested in a slow juicer. i had an 'express' juicer at first, but i find i get way more juice out of the cold press, and there's more options as to what i can put through it. that being said, my finished product makes about 4-4.5 pints [8 or 9 cups] which lasts me a whole day. i'm currently not juice fasting, but i'm still consuming mostly plant based whole foods in only necessary amounts to get enough fat and other nutrients that i can't get from the juice. otherwise, that amount of juice keeps me feeling full most of the day.

i have an hour and a half to get ready for work in the morning, and i have to leave my house around 6am to get there on time. by quarter to five, i'm gathering my juicer. the whole process- setup, prep, juicing and cleanup takes about 45 minutes.

first i juice the green 'base' veggies, celery and cucumber. one bunch and two whole ones respectively. this alone makes up almost a third of the juice. then i juice the lemon and ginger into that, and collect in a juice pitcher. i then juice a whole pineapple and add that to the pitcher. next a couple of apples/or asian pears, oranges, a lime, carrots, depending on what i have on hand and what is freshest at the market. i give it one good stir and then pour it out into four pint sized mason jars, leaving a little space in a couple of them for the 'boosts'. for these i use beet root as one, and dark leafy greens such as spinach or parsley as another. these and other sorts of things that have many health benefits but a strong/bitter taste i spare the rest of the batch from and keep them as a 'meal' of their own. 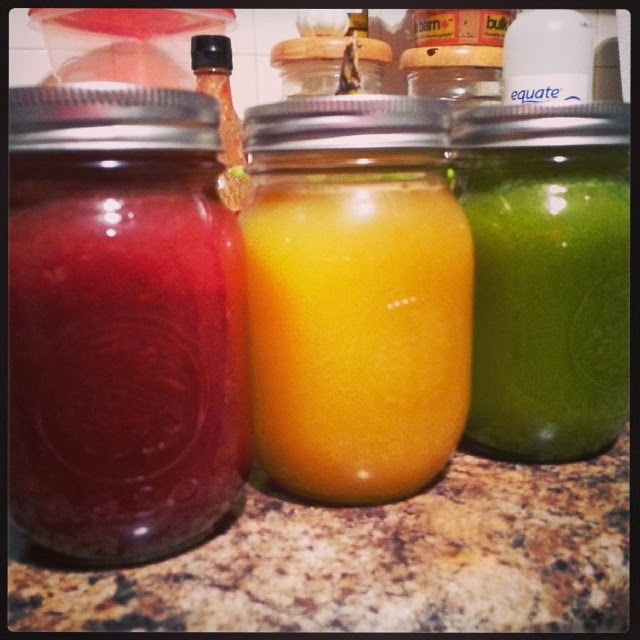 cleanup gets easier every time, once a 'ritual' is formed and refined it doesn't seem so daunting of a task. some may say that it's a lot of effort for some juice, but really i think quite the opposite. it's minimal 'effort' to absorb lots of nutrients and enzymes from raw, 'living' plant based foods that i'd certainly not be able to eat all in one day. in fact, my entire day would be steady munching to pack all of that goodness in! i didn't start out with this amount, maybe half and worked my way up.

some things that i have noticed: i started with roughly two quarts of juice a day at the beginning of the year, and i am telling you i haven't had so much as a sniffle since. i have seen my entire team at work, most of my friends, and my boyfriend [who i live with] through some nasty cold and flu viruses and i remain completely unaffected. this may be due to the outrageous amounts of actual, real true vitamin C [and everything else!] that i'm juicing from fresh produce. i would at least have one quart if i had to spread my supply, as a day without juice is a day without energy. i have recently upped my intake to double [so 4 quarts total per day], and in turn my insatiable appetite for all things horrible for me is easing off. food cravings aren't nearly as bad, and in fact processed foods taste different [not as good] to me now that i have had such an elevated intake of raw, real food.

so here's hoping that the next leg of this journey i'm on involves some real weight loss. i think my body is starting to realize that no, i'm not starving her.. and yeah, it's okay to let go of those extra pounds that were protecting my precious organs from all the 'dead food' i've been bombarding my body with over the years. you take what you can get, right? well now that i'm not living out of a backpack and have a steady income i have no excuses not to take better care of myself. here's to my health..