I dreamt of tacos..

For real. I had a hard time sleeping the other night, but in the hour or so I was asleep, I dreamt of making tacos. Meatless tacos with gluten free soft tortillas. It was such a vivid dream, step by step of these tacos in the making. 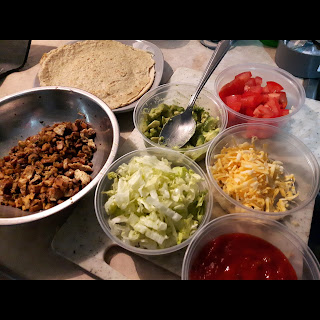 First I took a bunch of mushrooms and diced them into little cubes. I tossed them in a bowl with olive oil and a taco blend of spices, Himalayan salt, and a pinch of pepper.

I preheated my fry pan to an almost medium heat [4 on my stove dial] and fried my mushroom cubes til browned. In the meantime, I beat a large double-yolk farm egg, which I drizzled over the browned mushrooms and continued to fry until cooked.

In my nutribullet I made 'flour' from organic quick oats [2/3 cup-ish], and mixed in a bowl with almond milk until it became the consistency of porridge. I beat a double yolk farm egg and mixed thoroughly with the oat and almond milk blend.

Once the mushroom 'meat' was cooked, I transferred it back to the bowl. I used the same pan at the same temperature and added a little olive oil. I then used a ladle to scoop the oat mix onto the centre of the hot pan, and a spatula to spread the mix onto a thin circle. 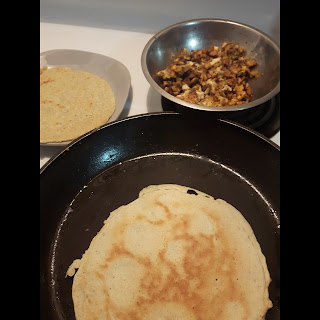 After a few minutes it was browned perfectly, using the same method of determining doneness as making pancakes. The oat mix takes a little longer to cook through than wheat flour. They turned out light, a little fluffy, and perfect for rolling full of goodness. The eggs could be replaced with a vegan option of preferred, but I don't mind my farm fresh gems.

I spooned the mushroom mix, a little salsa, shredded lettuce, diced tomatoes, and cubed avocado tossed with lemon juice and a pinch of garlic powder. The avocado brings the creaminess you'd get from sour cream with a zip of lemon [which prevents the oxidation of the avocado]. Cheese was an optional item as it happened to be in the fridge, but I forgot to add it, and didn't even notice. The tacos were every bit as delicious as they were in my dreams.

Well, there you have it... my dream taco 'recipe'. My goal is to eat healthy so I can be healthy, and find whole  foods options that don't sacrifice on flavour. Because I LOVE FOOD! and I want to feel good too. Cheers!
Posted by Sadie Sea at 8:31 PM