chasing down the sun

man it's been a while since i have spent any quality time with the sun. i was lucky enough to get a ride home from work today instead of waiting for a bus, so i got home almost an hour earlier than usual.. i hit the trail as soon as i could to catch some rays. it seems every time i have a day off the weather decides to be miserable. i suppose that's what i get for deciding to start running in January. 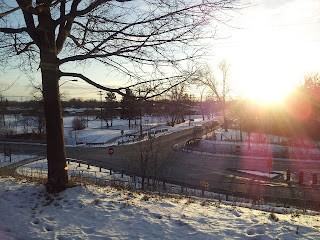 the light reflecting off the snow and the pines was intensely bright, that living green colour you almost forget exists in winter. however the clear skies brought quite a chill, so i had to cut it back to 8K today. not bad i say. 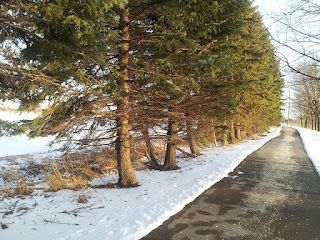 i have been keeping track of my weight the past couple weeks, checking it daily, and watching my average slowly decrease. for over a year no matter what i tried i couldn't get my weight below 200 pounds. now mind you i'm heavy set and have decent muscle structure beneath my cushy layer, i do some intense physical labour type jobs and have done my fair share of long distance hiking.. so i don't look 200 pounds. no one ever believes me when i tell them [they think i weigh less, thanks guys! haha], and i don't think i ever took a photo for proof. well what i'm getting at is, i stepped on the scale at 192 today, had to double check it in disbelief. really?! cool! so my average right now is around 194. not bad, about six pounds in a few weeks. here's a pic from the celly i took a couple days ago: 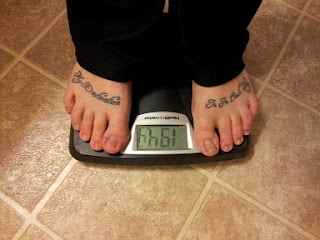 no doubting those feet are mine, that's for sure! i wanted to capture my highest weight, but i missed it. i'm not too concerned, i wouldn't wanna gain it back for the shot haha. anyways, losing weight is a part of my goal, but numbers aren't important. it has become apparent that my weight is affecting some of my ability, and i simply want to regain the flexibility and endurance i had before, and improve on that a bit at a time. i mean i'd love to get down to 175 [this year], i haven't seen those numbers in a couple years. i wish to weigh no less than 160-165 ever, as i like knowing i can whoop an ass if need be haha.. just kidding. but really.. i don't wanna be "skinny". i just want to weigh a little less, and feel better.

Email ThisBlogThis!Share to TwitterShare to FacebookShare to Pinterest
Labels: running for health, the scale, weight loss