alright now for the fun! i've been excited to try different recipes with Shakeology ever since a friend told me about it. if i'm going to use a shake or meal replacement it must be vegan as whey does unpleasant things inside my stomach. in fact, i don't usually use any pre-mixed shake at all vegan or not, i've never found one i enjoy enough to keep using. 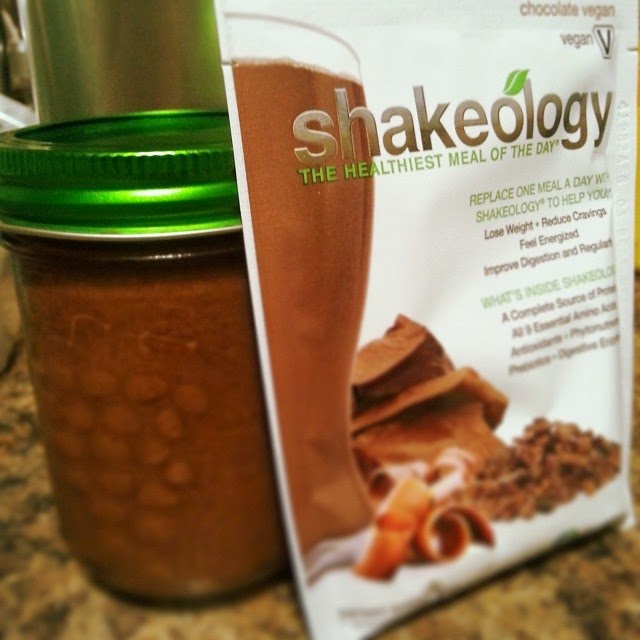 that said, it's usually all kinds of fun trying to hide the taste of said shake mix inside of some crazy recipe. i wanted to try my first serving on it's own though with some almond milk just to get a good idea of what i'm working with. the grit isn't as bad as others i've tried, and the cacao seems to mask the fresh-cut-lawn taste. it took a few sips before i could accept the taste [after my own recipe for smoothies not much stands a chance taste wise]. BUT! i could accept it.. just on it's own. that would never happen with other shake mixes. i hate to name names but i loved Vega as for what it could do for me, but there was no way in hell i could drink it straight, and it was a struggle even blending it.

alright so we got taste covered. did it keep me full? actually, yeah it pretty well did the trick till noon and i get up at six. i usually don't eat much in the evening anyways, and i didn't feel the need to eat more than usual that's for sure. i don't know about curbing cravings though, that probably would come in time. and if it works to help for weight loss, i'm hoping i'll be able to tell in the first couple weeks.

oh energy, that i had today for sure. i went to the gym today and came home immediately after and did PiYo. the stretching felt good, and the flexing i could def feel the muscles that were worked yesterday. i hope i see some results from this program, i'm digging it so far.

tomorrow, trying an actual recipe for Shakeology, and PiYo: Sweat.
Posted by Sadie Sea at 4:08 AM