alright day 8.. first of all, today was 'Sweat' day in PiYo land and holy crap i could barely keep up. i actually had to pause it a couple times! no one said i was in shape, which is the point in the first place. hopefully in a couple weeks i'll be able to make it straight through. as you could tell by the title of the episode, it was designed to get you moving. it's about ten minutes longer than the other ones so far and much quicker paced.

now back to that Shakeology stuff.. when i ordered it i'd told my coach that i would try it and probably stop the auto-order because i usually don't do premixed shakes. after yesterday's taste test i was a little more confident that i'd be able to 'work with it'. i have a fail-safe 'base' recipe that i've been hiding various supplements and superfoods in for my breakfast smoothies, so i decided to give that a try. 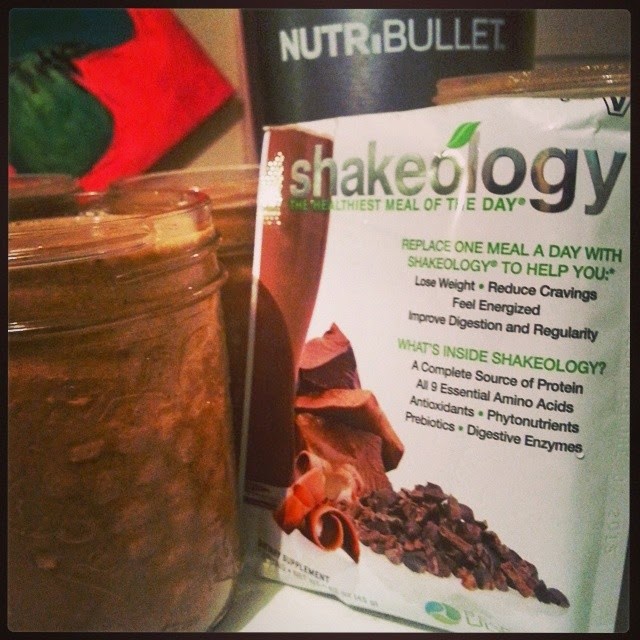 in the NutriBullet tall cup i put a frozen banana [fresh is fine but not the 'frozen shake' consistency], some unsweetened almond milk and unsweetened coconut water to a bit under the fill line. then i add the Chocolate Vegan Shakeology, a tablespoon of cold pressed coconut oil, a tablespoon [or to taste] of natural peanut butter, and some hulled hemp. pulse a few times, then blend. sip,.... amazing.

first of all, yes i am aware of the extra calories from the banana, coconut oil and peanut butter. if this concerns you and you want to try the recipe, alter it as you need. i use a lot of calories throughout the day as i don't spend a whole lot of time at rest. plus, these ingredients keep me full for longer and give lots of energy and i don't need to eat as much later on, which is why i use this base in the first place. it's actually more filling with the shakeology, and i split it in to two servings, breakfast and brunch.

a good day indeed. tomorrow is 'rest day' in the PiYo program, but i'll surely find something to do to stay moving. until then..
Posted by Sadie Sea at 9:30 PM